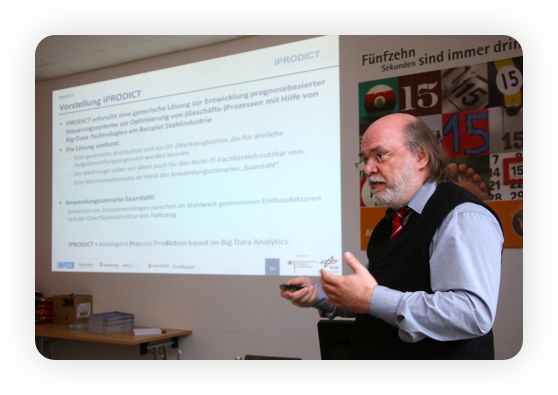 The Computer Graphics Lab at Saarland University was founded by Prof. Dr.-Ing. Slusallek.

In 1999 he came from Stanford University to Saarbrücken. As head of the Vision project, a work group for physically based rendering at Erlangen University, Slusallek gathered in-depth experience in the area of parallel and distributed processing of visual information.

Together with his skills on object oriented software development these experiences are the basis of the success of the two main research highlights of the Computer Graphics Lab: Ray-tracing and multimedia.

Hardware implementation of the Ray-Tracing algorithm.

The ray-tracing algorithm is very well suited for a distributed computation approach and the interactive photorealistic visualization of highly complex virtual 3D scenarios.

Through a strict restructuring of the ray-tracing algorithm with respect to parallelization and utilizing features of modern processors, ray-tracing could be employed to visualize CAD models with several million polygons interactively for the first time.

Based on this it was possible to present the world’s first complete hardware implementation of the ray-tracing algorithm. To utilize these results inTrace GmbH was founded in 2003.

Besides computer graphics the lab is occupied with the research, development and implementation of distributed applications. They are based on a middleware for relaying, processing and displaying multimedia data.

The NMM project “Network integrated Multimedia Middleware” combines all these efforts to provide new applications for home entertainment and mobile applications. Due to the long term cooperation with companies like Motorola or Siedle and the growing interest of the industry Motama GmbH was founded in 2005.

The ray-tracing algorithm is very well suited for a distributed computation approach and the interactive photorealistic visualization of highly complex virtual 3D scenarios.

Additional to his job at the Saarland University Prof. Slusallek is one director of research at the German Research Center for Artificial Intelligence. Taking over the work group of Prof. Jörg Siekmann the research group for Agents and Simulated Reality develops application oriented solutions in the area of artificial intelligence, computer graphics and the new area of simulated reality.

Since 2007 the German ministry for education and research funds the Cluster of Excellence for Multimodal Computing and Interaction. As a principal investigator in this cluster the work group of Prof. Slusallek works on the visualization of large complex terrain and urban data sets. The main focus is on the reliable and interactive visualization of such complex data sets and the exploration on how such methods could support decision making and communication.

In July 2004 the Saarland funded the creation of the Competence Center Informatik Saarland at the Saarland University. The goal is the dissemination of the innovative research results, their widespread publication and the eased access for everyone interested in computer science. Prof. Slusallek is the founding spokesman of the CCIS, which also takes care of attracting young talented students to Saarland University’s computer science department.